Basingstoke (or ‘Roundabout City’ as it’s often known) sits proudly to the south of the midlands, just a stone’s throw across a valley at the source of the River Loddon. Developed following World War II to accommodate the London ‘over-spill’; the town is fondly referred to by it’s resident’s as ‘Amazingstoke’.

I didn’t know anything about Basingstoke before seeing Sophie Ellis-Bextor perform at ‘The Anvil’ on the penultimate night of her ‘Song Diaries’ tour. Following six successful studio albums and a music career spanning over two decades; Sophie continues to research every town she performs in, making each crowd feel special and unique. Alice treats us to an original collection of songs including ‘Dodge a Bullet’ ‘Liquorice’ and a sultry smooth cover of Blackstreet’s ‘No Diggity’ before performing ‘Icarus’ a catchy song she had co-wrote with Sophie herself.

It’s not long before the stage is filled with musicians and the sound of violins, harps and clarinets can be heard warming up for tonight’s headlining act. Dressed in a glittering turquoise gown, Sophie gracefully walks on to the stage with an effortless air of glamour and all the confidence needed to stand in front of an orchestra with ease.

Kicking off the show with full orchestral renditions of hits including ‘Young Blood’, ‘Love is a Camera’ and ‘Music Gets the best of me’; Sophie is warm and engaging throughout as she proceeds to address the audience as ’Amazingstoke’ for the rest of the evening. It’s hard not to like the former model as she laughs and jokes with the crowd giving each song 100%. Having seen Sophie perform live at a festival before, she sounds even more impressive in such an intimate and extravagant setting. It’s hard to believe it’s her first-time touring with an Orchestra as Sophie dances across the stage showcasing her iconic vocals. The Orchestra are joined by members of Sophie’s band as they fill the second half of the show with an array of disco tracks including spell-binding covers of ‘Take Me Home’, ‘Don’t Leave Me This Way’ and ‘Heartbreak (Make Me a Dancer).

Sophie is in her element and her energy is infectious as she encourages the audience out of their seats to dance along with her. ‘Get Over You’ and ‘Murder On the Dancefloor’ are unsurprisingly well received and definite highlights as the crowd sing along to every word.

As Sophie waves goodbye and leaves the stage you would struggle to think of a better way to end the evening on such a high. As I collect my belongings and prepare to leave after a thoroughly enjoyable show, Sophie surprises the crowd once more with an impromptu encore. The venue falls silent as Sophie appears at the front of the balcony to the side of the stage. Accompanied by only a couple of violins and no microphone she proceeds to sing a heartfelt rendition of ‘A Pessimist is Never Disappointed’. The song she originally sang with indie-rock band The Audience in 1998. Following a nostalgic and magical performance celebrating Sophie Ellis-Bextor’s greatest hits, it’s the perfect ending to a wonderful evening and seeing Sophie perform alongside a resplendent orchestra was truly a special sight to behold. 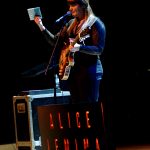 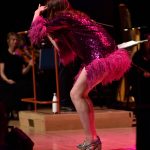 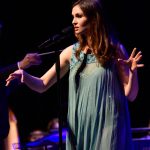 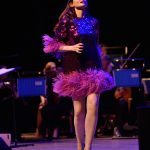 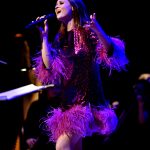 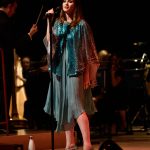 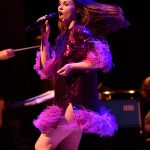 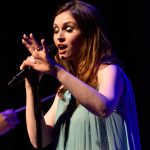 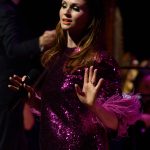 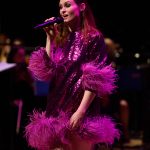 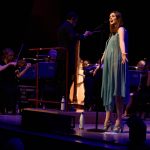 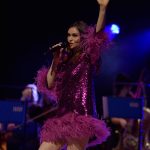